Patrick Megaro, More than 70,000 people have signed Petition asking for the release of Corvain Cooper, sentenced to life for marijuana offenses 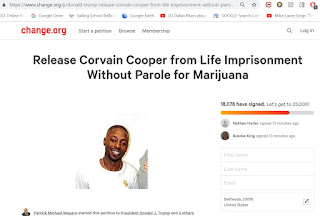 More than 70,000 people have signed Petition asking for the release of Corvain Cooper, sentenced to life for marijuana offenses

More than 70,000 people (as of October 8, 2018) have signed a petition requesting that Corvain Cooper be released from prison. He has been sentenced to life in prison for non-violent marijuana offenses under the “Three Strikes” law.

Many people support Corvain Cooper. His lawyer Patrick Megaro created a petition that over 70,000 people have signed. See https://www.change.org/p/donald-trump-release-corvain-cooper-from-life-imprisonment-without-parole-for-marijuana

Attorney Megaro has simultaneously petitioned President Donald Trump for executive clemency and commutation of his sentence of life imprisonment without parole.

Megaro explains: “This is a particular disturbing case, and I felt compelled to help Cooper and his family. He has two little daughters who miss him dearly. This case has broader implications, it is estimated that there are about 2,000 people … men and women, fathers and mothers, in prison for life for non-violent drug offenses, oftentimes involving very small amounts of such substances. This punishment does not fit the crime. Marijuana is now legalized, decriminalized, or approved for medicinal use in one form or another in the majority of States. Fundamental fairness is at the heart of this case.”

The background is as follows. Corvain Cooper was charged in the United States District Court for the Western District of North Carolina with conspiracy to distribute and possession with intent to distribute 1,000 kilograms or more of marijuana, and conspiracy to commit money laundering and structuring transactions.  A special information was also filed against Cooper, alleging two prior felony convictions for possession of drugs (one for marijuana, one for codeine cough syrup) in the California state courts. The filing triggered a mandatory life sentence without parole.  The reason for the unusually harsh sentence is the so-called “Three Strikes” law.  These laws require a person guilty of committing a drug felony and two other previous drug felony convictions to serve a mandatory life sentence in prison. The “Three Strikes” law significantly increases the prison sentences of persons convicted of a felony who have been previously convicted of two or more violent crimes or drug felonies, and limits the ability of these offenders to receive a punishment other than a life sentence.

Cooper tried appealing his conviction and sentence, arguing that the sentence of life for non-violent crimes was against his Eighth Amendment (Amendment VIII) of the United States Constitution which prohibits the federal government from imposing excessive bail, excessive fines, or cruel and unusual punishments.  The United States Court of Appeals for the Fourth Circuit upheld the case.

The State of California enacted Proposition 47 in 2014, which re-categorized several non-violent offenses as misdemeanors. Prior to enacting Proposition 47, possession of marijuana was considered a felony. This also allowed people who had prior felony convictions under the old statute to vacate them.

Proposition 64 (the Adult Use of Marijuana Act) was enacted on November 9, 2016, by the State of California which legalized the use of recreational marijuana. This Act permitted certain people who had been convicted of marijuana felony offenses to apply to vacate those convictions and reclassify them as misdemeanors.

“I have been representing Mr. Cooper and I have said from day one that I am in this fight to help Corvain Cooper no matter how long it takes,” comments his attorney Patrick Megaro.
About the Corvain Cooper Case

According to a press release of the U.S. Attorney’s Office, “from in or about 2004 through January 2013, Cooper was involved in a drug conspiracy that trafficked marijuana from California to the Charlotte area. Court records show that Cooper was charged with conspiracy to distribute and to possess with intent to distribute at least one thousand kilograms of marijuana as well as money laundering conspiracy and structuring financial transactions through banking institutions to avoid IRS reporting requirements. Cooper, along with two co-defendants, Evelyn LaChapelle and Natalia Wade, were convicted of all charges on October 18, 2013, following a three-day trial.” He was sentenced to life in prison on June 18, 2014. See https://www.justice.gov/usao-wdnc/pr/california-drug-trafficker-sentenced-life-prison-drug-conspiracy-and-related-charges

A link to the online Supreme Court docket can be found at
https://www.supremecourt.gov/search.aspx?filename=/docket/DocketFiles/html/Public/18-5222.html

Join the other supporters of Corvain Cooper who have signed the petition at:
https://www.change.org/p/donald-trump-release-corvain-cooper-from-life-imprisonment-without-parole-for-marijuana

Patrick Megaro, How to Preserve Error at Trial – An Appellate Lawyer’s Viewpoint — PART 2 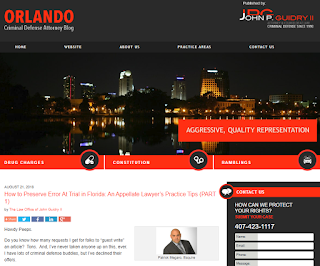 How to Preserve Error at Trial – An Appellate Lawyer’s Viewpoint — PART 2
by Patrick Megaro, Esquire

This article was originally published at https://www.orlandocriminaldefenseattorneyblog.com/how-to-preserve-error-at-trial-an-appellate-lawyers-viewpoint-part-2/#more-1766

Sometimes in life, you have to speak up.  Yes, that’s what you pay an attorney for.  But no, it doesn’t always work the way it should.  And unfortunately, if your attorney doesn’t object when he/she should have–this will create all sorts of problems later.

The good news is, we have appellate attorneys like Patrick Megaro.  He solves the problems created by all the things that go wrong during a criminal trial.  And yes, lots can go wrong.

Enjoy Part 2 of Patrick Megaro’s warning to we defense attorneys, he’s going to remind us how to keep a criminal jury trial clean enough to reverse the conviction on appeal–should things come to that.   I published Part 1 of his article a few weeks ago, it deals with pretrial motion issues and voir dire.

Patrick Michael Megaro is a criminal appellate and post-conviction relief attorney, who practices in New York, New Jersey, North Carolina, Florida, Texas, and Washington State, and numerous Federal courts.  A native of New York, he started his legal career with The Legal Aid Society, Criminal Defense Division in New York City as an institutional public defender before going into private practice.  As an attorney, he has tried over 50 cases to verdict in various State and Federal courts, and has handled thousands of appeals and post-conviction relief petitions.  He is a partner in the Orlando-based firm Halscott Megaro, P.A. and Appeals Law Group.

To preserve for appellate review an issue relating to an alleged improper comment, a party must object to the comment when it is made and obtain a ruling on the objection.  If a party objects to the comment, but fails to secure a ruling from the trial judge, the issue is waived unless the judge deliberately and patently refuses to rule on the objection.

Motion for a Judgment of Acquittal

“The defense moves for a judgment of acquittal because the State has failed to make a prima facie case” is INSUFFICIENT to preserve a sufficiency issue for appeal.

That said, when a motion for judgment of acquittal is well taken, I have never understood why an attorney’s failure to make a sufficient motion for judgment of acquittal is not ineffective assistance on the face of the record. Even a marginally prepared attorney should know the elements of the offense for which a client is on trial. That marginally prepared lawyer ought to be expected to listen to the evidence closely enough to know whether the State failed to prove an essential element of the offense. There rarely, if ever, is a tactical reason for a lawyer not to move for a judgment of acquittal when the client is entitled to be acquitted.

A motion for a judgment of acquittal has to be made at the close of the State’s evidence, and AGAIN at the close of ALL evidence, even if the defense does not put on a case, in order to properly preserve the issue.

Of course, you should identify the specific elements which are lacking evidence, and be prepared with caselaw and to argue the trial record why the evidence was insufficient.

In order to preserve a sentencing argument, the objection must be made BEFORE and AFTER sentence is imposed.  We have learned the hard way that relying on a judge who says “your exception is noted” is insufficient to preserve a sentencing error.  Whatever objections to make to the Pre-Sentence Report, the Sentencing Scoresheet, or anything else must also be made AGAIN after the court formally pronounces sentence or else it is waived.

DO NOT RELY ON FUNDAMENTAL ERROR

We have all tried cases that we knew would be extremely difficult, if not impossible, to win.  It is easy to look at a seemingly hopeless situation and forget to properly preserve issues for appeal.  However, I can tell you that I have had more than my fair share of cases that were “dead losers” at trial but came back on appeal because the court or the prosecutor thought that because there was overwhelming evidence of guilt, they could be free to take shortcuts.  In those cases, the preservation of error for appellate review was the trial attorney’s greatest accomplishment.

For the close case, appellate courts are more likely to reverse if an issue was properly preserved.
For the cases that felt like trial was a “suicide run,” this is all the hope the client has.

Patrick Megaro, More than 70,000 people have signed Petition asking for the release of Corvain Cooper, sentenced to life for marijuana offenses

More than 70,000 people have signed Petition asking for the release of Corvain Cooper, sentenced to life for marijuana offenses Pe...